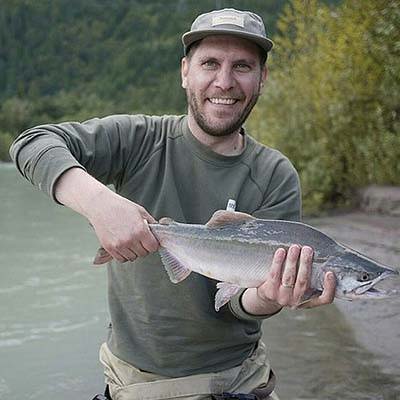 Where are you from?
Vancouver, BC, Canada.

What's your work?
I'm the host of a history show called "BC Was Awesome" which is going into its second season. We basically track down weird history stories in British Columbia. I'm also the owner and Editor-In-Chief of an online magazine called "Vancouver Is Awesome" which focuses on lifestyle and culture in the city.

What's your passion?
Fishing and conservation. I go fishing every chance I can, and luckily I don't have to go too far outside the city to get to some of my favourite spots. Over the past few years I've done a lot of work with an organization called the Pacific Salmon Foundation (PSF.ca) which educates the public about the importance of salmon as a keystone species, as well as funding research and rehabilitation of waterways to make sure our kids' kids will have fish to catch.

Favorite place traveled?
Tofino, BC. Specifically this one fishing trip I took with a guide named Blake Klopfenstein a few years back. We flew into a lake that's way off the grid; I'm actually not allowed to tell anyone the name of it because you have to get permission from the local First Nations band to go on it, and they don't want a ton of people going there. A little float plane pilot dropped us off then flew off as Blake blew up a little inflatable boat. We took the next 8 hours slowly floating down a river that exits the lake, stopping to flycast for steelhead at different spots along the way. At the end of the trip our boat drifted out of the river into the ocean, and we waited for a little while in complete silence before the plane picked us up and brought us back to Tofino. The scenery and the experience were incredible, even though I didn't land any fish. I hooked into a couple though!

Next trip?
I'm thinking of heading up to Desolation Sound to catchlingcod. I bought a little 14 foot aluminum boat a few months back and I've been dragging it behind my Highlander to a bunch of different spots.

Favorite thing about Ridgemont?
Ridgemont makes the shoes I've been looking for. I spent a long time in skateboarding and streetwear (in a previous life I worked in the art department of Girl Skateboards) and I feel like most of the footwear in the outdoor category lands with an older, granola munching set. Most of it is functional but heinous. The Monty is basically perfection for me in that it's functional and it looks great. It's the perfect hiking/camping/fishing shoe for me.

Sign up to our newsletter and get 15% off your first order.